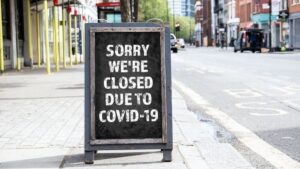 There are, of course, numerous reasons why a second lockdown is to be avoided, ranging from the psychological impact which prolonged periods of lockdown have on individuals, the threat to physical integrity as domestic violence has been shown to increase during such times, the educational costs for children and students, etc. One of the most salient reasons, however, relates to the economic costs of lockdown measures. Numerous employees in the private or public sector, as well as NGOs, self-employed citizens and businesses, both small and big, see their income severely diminished or even obliterated as a consequence of the imposition of prohibitions on certain activities. Hotels, restaurants, shops, airlines, cinemas, theatres, museums, libraries, concert venues, sport venues, gyms, indoor markets, and many other types of establishments were forced to either shut down during the first lockdowns or, where possible, fundamentally change the means through which they deliver their services – with important costs. Many of them will have to do so again under the renewed lockdown measures. In this short essay, I want to address the question of how the economic costs of the pandemic lockdowns should be distributed[1].

The first way of divvying up the costs of pandemic lockdowns is to adopt a laissez-faire stance and refrain from engaging in any redistributive actions whatsoever. In practical terms, this alternative would mean that those individuals for whom pandemic lockdowns turn out to be economically damaging are expected to fully internalize the costs, without any public assistance. Though this alternative might be appealing to some minority of libertarians, who believe that redistributive measures are wrong under any circumstances, the widespread view on burden-sharing in the specific context of pandemic lockdowns is at odds with it.

There are several reasons for this:

Some, or perhaps even all, of these justifications will, I presume, be appealing to utilitarians, egalitarians, sufficientarians, prioritarians, desert-theorists and even libertarians alike.

There is a plausible case, therefore, in favour of the idea that individuals who are economically disadvantaged by pandemic lockdowns should not be left to fend for themselves. The state should adopt redistributive measures aiming to help those who are in such positions. This claim has been widely put into practice earlier this year, albeit through different policies: some geared specifically to those directly affected and some more universal in nature; some covering a wider amount of losses, some covering a smaller amount, etc. In spite of these differences, many states did take the economic challenge of COVID-19 lockdowns seriously, and engaged in redistributive measures. The deeper question, however, is who exactly ends up paying for these measures, since the state itself is merely a vehicle through which the redistributive process is enacted, while the agents who bear the burdens of redistributions are its citizens.

Broadly speaking, there are a few standard options which states can appeal to in order to finance the redistributive measures following lockdowns:

As this enumeration is not meant to be exhaustive, other avenues may also be identified. While these options are certainly worthwhile and a combination of them has usually been deployed as part of the redistributive policies related to the pandemic lockdowns, all of them have their drawbacks and are bound to have a detrimental impact on the majority of citizens – either due to increased inflation, increased debt which has to be payed off further down the road or cuts in public services which can no longer be funded. While these costs may ultimately prove, on balance, to be justified, we should also explore ways of financing the exceptional redistributive measures required by pandemic lockdowns, which are less harmful to the general public.

One such proposal is that the costs of pandemic lockdowns should be disproportionately covered by a narrower group, consisting of those individuals and businesses who have already acquired vast amounts of economic resources and have substantially prospered as a consequence of the pandemic lockdowns. While unemployment soared in 2020, a recent analysis shows that in the US for instance, billionaires have increased their wealth by 31.6% between mid-March and mid-October, with an aggregate amount of almost 1 trillion dollars[2]. Jeff Bezos alone increased his wealth by 90 billion dollars in this timeframe, according to the analysis cited. While these increases are partly traceable to the dynamic of the stock market and to the way in which governmental aid has been itself distributed, they are also driven in part by the particular services offered by some businesses, such as e-commerce, digital streaming, videoconferencing, artificial intelligence, food delivery, etc. The lockdowns, therefore, facilitate the economic success of some businesses over others, who are basically forced to stop their productive activities or seriously revise them (where possible), while other institutional provisions ensure that those who are already economically advantaged are protected and well positioned in order to benefit even more.

All the reasons mentioned earlier in the article in favour of a duty to assist those who are economically disadvantaged by the lockdowns also count in favour of identifying the primary duty-bearers as those who are both rich and have further enriched themselves during the pandemic. Widespread economic inequality leads not only to political instability, but also has damaging effects for the economic institutions of a country, so placing the redistributive burden primarily on the richest individuals, through a one-time tax, would not be detrimental to the general welfare. Disproportionately taxing the rich in this instance would be consistent with the requirement that the state ensures the basic needs of each citizen is met. Those who have benefited from the pandemic context and policies are better off through a combination of luck and chosen features, but the former plays a major part in their fortunate outcome. Those who have benefited from the pandemic context and policies are better off in part due to the fact that the state has temporarily neutralized competitive business sectors, and are therefore drawing unjust benefits. Once again, various theories of justice converge in allowing (or even requiring) a specific way of distributing not only the benefits, but also the burdens of redistribution[3].

While the brief proposal sketched here cannot explore the various arguments in favour of and against in a more thorough way, I do believe it puts forth a prima facie plausible case for identifying the primary duty-bearers for the redistributive measures associated with lockdowns as those citizens who are both rich and whose wealth has considerably improved during the pandemic. Though the conclusion advanced is not surprising and, I believe, not highly controversial, it is one seldomly discussed in the public sphere[4] and one which, perhaps paradoxically, appears to have slim chances of garnering sufficient political traction so as to be implemented.

[1] Of course, I do not mean to suggest that these are the only economic costs incurred as a consequence of the lockdowns. Other such costs are driven by the requirement that some parents work less in order to stay at home with their children who no longer attend school, or by the increasingly worse healthcare, both in psychological and physical terms which follows from prolonged lockdowns etc.

[2] This number is disputed, with other sources providing somewhat different numbers. Still, the wide majority of estimates put the total wealth gained well above half a trillion dollars.

[3] Note that I defend the idea that the primary duty-bearers are those individuals who are jointly rich and beneficiaries of the pandemic. There is also a case to be made that individuals who hold only one of these features should also bear some (perhaps significant) part of the redistributive burden. I believe such an assessment is correct, but only to the extent that it characterizes such individuals as secondary duty-bearers, who should bear a smaller part of the burden compared to those holding both features, but a bigger part of the burden than individuals who are neither rich nor beneficiaries of the pandemic. This is because the rich are indeed in a position where sharing more of the burden would not have such detrimental effects for them and their extraordinary level of economic resources is, arguably, unjust in itself, but they have not necessarily reached that level by directly profiting from the circumstances which makes the redistribution of wealth imperative. And because those who are not rich but made gains due to the pandemic have indeed benefited from those circumstances, but would feel the impact of having to relinquish a big part of these resources harder than the rich. Furthermore, such a policy might have detrimental effects on the entrepreneurial incentives which crises situations bring about and which are sometimes efficient in reducing the severity of such events.

[4] See, however, the recent bill proposed by Bernie Sanders, Kirsten Gillibrand and Ed Markey, which proposes a 60% tax on the gains in wealth of US billionaires made between the 18th of March 2020 and the 1st of January 2021. The chances of this bill to become law is, however, virtually null.