Their reaction has come in two waves. The first wave, from 2008 to around 2012-13, was a mix of a mea culpa and deflection. While some central banks such as the Bank of England, accepted that their policies exacerbated inequalities, others dodged the issue by pointing to the fact that inequality does not figure in their policy mandate.

During the second wave, starting around 2015 and continuing until today, central banks have started to push back on the accusation. This pushback does not come as a surprise, given that central banks see this issue as a potential threat to their independence in monetary policy making.

The central argument of this pushback is this: While it is true that QE has a direct inequality-exacerbating effect through rising asset prices, it also has an indirect inequality-dampening effect by stimulating growth and thus reducing unemployment. Several research papers published by the European Central Bank and the Bank of England in recent years argue that, overall, QE does not exacerbate inequality and potentially even reduces it. 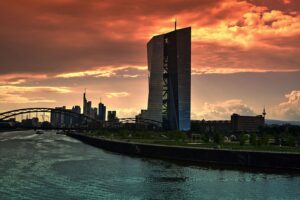 What this argument does and does not show

Central banks are basically saying: Look, we are better off in terms of inequality with QE than without it. This is a controversial empirical question, but it may well be true. For the sake of argument, let’s grant that it is in fact true.

However, this is not sufficient to get central banks off the hook in terms of justifying their policies. To do that, central banks would have to convince us that their course of actions is preferable not just to doing nothing, but also compared to alternative policies. Could some of the inequality-exacerbating effects of monetary policy have been avoided without prejudice to price stability? Could we avoid them in similar situations in the future?

There are at least two obvious candidate policies, one within the discretion of central banks themselves, and one that requires the cooperation of other branches of government. The first involves changing the instruments by which central banks inject liquidity into the economy. Instead of buying financial assets through QE, central banks could employ so-called helicopter drops to disburse money directly to citizens. While no less effective as a tool to target price stability, this would avoid the inegalitarian side-effects of QE.

The second option consists in coordinating with government to ensure that the required stimulus be conducted through fiscal policy rather than through monetary policy instruments. Admittedly, in contrast to the first option, this is something that central banks could not do on their own.

Both of these options can be expected to lead to an overall impact of monetary policy on inequality that is more benign compared to QE. When central banks justify their actions, they need to take these options into account.

To bring the point home, think of an analogy: Suppose airlines were close to developing an emission-free technology. Instead of investing their energies in bringing this technology to market, they keep flying on kerosine while using carbon offsets to compensate every ton of CO2 their planes emit. They justify their course of action by pointing to the fact that they manage to do their job — flying people — while being at the end of the day ‘carbon neutral’. Even if the latter is true, this does not justify that the airlines refrain from perfecting the emission-free technology.

If you are not convinced by the hypothetical argument of the airlines, then you should be equally sceptical about central banks’ recent pushback against the probes into the inegalitarian impact of QE.

Central banks are fudging the issue when it comes to inequality. We should not let them get away with it.

This blog entry is based on a paper (in French) co-authored by: