The principle of just cause dictates that a war can only be fought to achieve aims that are just. Applying this to the strike, it asks: is the strike being called to achieve just aims? I think so. The strike is a continuation of the 2018 dispute on proposed pension reform and the newly-formed four fights. The five issues at stake are: pension, fair pay, equal pay (gender + BAME pay gap), precarity and unsustainable workload. To add some context, academia is one of the most casualised professions in the UK with more than 100,000 staff hired on fixed-term or other types of precarious contracts. The gender/BME pay gap remains unchallenged. At my institution, the mean gender pay gap is at 18,4% while the ethnic pay gap is at 10.5%. These factors have negatively impacted the mental health of academic staff with record numbers of cases being referred to professional support services. Ultimately, the strike aims to achieve better and fairer working conditions for staff in higher education. It’s difficult to refute the legitimacy of this aim.

This principle asks if the strike was called by a legitimate authority? In (traditional) just war theory, this is to rule out the possibility of private wars (wars waged and fought by individuals). Only the sovereign has the power to declare war on the behalf of the community which it governs. The strike was called by the HEC (Higher Education Committee), the body with the legal power to do so. This principle is met.

Is this strike action the last resort? Note that ‘last resort’ here should not be understood as literally last resort. This would imply an action (war or others) can never actually be just for there is always something else to do. A more plausible understanding of this principle demands all actions short of strike which can be reasonably expected to work to be attempted before a strike is called. This includes negotiations, threats of strike, working to contracts (or ASOS). There is a case to be made that all actions that can reasonably be expected to work have been tried. Before the first round of strike in November last year, the employers were unwilling to acknowledge the severity of some of the issues (especially on precarity and workload). Strike action in November and the threat of more strikes have moved the employers to make some concessions. But the latest (and only) UCEA offer on four-fights was rejected outright as it was deemed as insufficiently substantive by the negotiators and a majority of HEC members. Most recently, Mark E Smith, vice-chancellor of the University of Southampton and chair of UCEA has said that the employers will not concede any further. It seems that all other options short of a strike have been explored and failed.

Proportionality and Prospect of Success:

This is perhaps the thorniest issue. Some UCU members have questioned if 14-day of strike action is proportionate to the massive financial loss and disruption to students’ learning, especially since the notion of success is murky in this instance. The strike must have a good chance of achieving its aims within the constraints of the proportionality requirements. It cannot, for instance, employ disproportionate measures even if doing so would increase its chance of success. Now, part of what makes this criterion difficult to answer is the non-quantifiable nature of some of the aims being pursued. How are we to answer questions such as: what is proportionate to end precarity? What is proportionate to end the gender/ethnic pay gap? The systemic nature of these issues adds to the difficulty in defining what, exactly, constitutes success for this strike. The gender/ethnic pay gap, casualisation and unsustainable workload are not going to be fully addressed by a 14-day strike. Does this mean that any achievement short of this indicates a failure?

I think this might be too strong a claim. Changes have to start somewhere but systemic changes take time. In this light, each industrial action is not an isolated incident. Rather, strikes that are closely connected, i.e. waged on the same issues against the same employer, should be seen as part of the same dispute, despite the staggered timeline and occasional spikes (like this one) in intensity. Each round of strike action moves the employers and employees closer towards an acceptable compromise. The notion of success, in this sense, should be defined more modestly. That is to say if the strike doesn’t fully end precarity, the gender/ethnic pay gap, the assault on pension, etc. for good then it doesn’t necessarily mean that the strike has failed. If this round of strike action can achieve a nationwide framework with specified commitments from the employers to address staff’ concerns on the 5 issues within a reasonable timeline then that could be seen as a success. The costs of walking out for 14-day are undeniably high. But the costs of not striking, the continued pay gap, the casualisation of academia, the routine 55-hour working week, etc. are even higher. 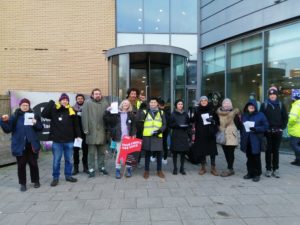