In particular, British badgers have been the target of a systematic campaign of violence since 2013. The Badger Trust estimated that by the end of 2018 the government had spent over £50m of public funds killing over 67,000 badgers. These animals are killed indiscriminately. They are either captured in cages and shot, or shot on sight. Not every animal is killed instantly and those who survive for longer than five minutes may die agonisingly painful deaths or be disabled in ways that make continued life in the wild very difficult.

What did the badgers do to deserve this kind of treatment? They are alleged to be the primary cause of the spread of bovine tuberculosis (bTB) on farms. According to a 2014 government report, this disease costs the taxpayer and farmers tens of millions of pounds annually because infected cows have to be slaughtered. Controlling bTB is viewed as vital, therefore, to protect the cattle industry, as well as limiting health threats to humans, companion animals, and wild animals. In a bid to step up efforts to fight the spread of bTB, the Conservative government approved expanding the cull into 11 new areas this year. 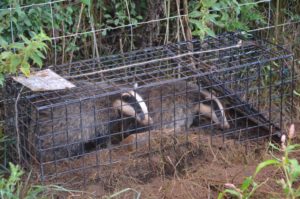 Setting aside the fact that we are principally maiming and killing badgers so that we can harm and kill cows, scientific evidence in support of the cull is very mixed. For one, not everyone agrees that badgers are responsible for bTB. Numbers of infected badgers are quite low and there has been some speculation that cattle are the source of TB in badgers. Moreover, it is claimed that at least 70% of the existing badger population in the targeted areas must be killed if the cull is to be effective and there has been some doubt expressed about whether this target is ever met, which further suggests that current killing is ineffective. Additionally, as the 2018 government review indicates, badgers are not solely or even primarily responsible for the spread of disease on farms. Though the disease may indeed be transmitted from badgers to cows, it is poor disease management by individual farmers and the livestock sector more generally that is “severely hampering disease control measures”. Improved and more frequent testing on cattle, more movement restrictions, and more rigorous biosecurity on farms are all measures thought to be necessary for stopping the spread of bTB in cattle herds. Without concerted effort and investment on the part of the cattle industry, bTB will continue to wreak havoc on cattle farms and badgers will continue to pay the ultimate price for human inertia.

Even if the cull were an effective way to control the disease, it is difficult to see why that would justify killing badgers when there are non-lethal options on the table. One obvious possibility is that we vaccinate badgers against TB just as we do humans. The main reason that vaccination has not been adopted seems to be that there is not enough research to show that vaccination is as effective as killing animals, and it is alleged to be more costly to farmers. Yet the Welsh government has scrapped the cull in favour of a vaccination programme and Wildlife Trusts Wales maintains that vaccination is the only method that effectively reduces the prevalence of TB.

While Labour and the Green party had pledged to end the cull, the Conservative manifesto was silent on the issue. This omission suggests that the incoming Conservative government means to continue with this policy of mass killing. This is something that we must campaign against to ensure that the blatant disregard for the plight of these creatures does not go unchecked. Of course, badgers are not the only animals in danger. Rather they serve as an example of how government policy can have a devastating impact on our fellow nonhumans. A just society is one that is fair to all and so we must continue to expand the horizon of our concern to ensure that no one – human or otherwise – is left behind. This means ensuring that our governments do not fail in their duty to protect all members of society and that they are held to account if they do so fail.