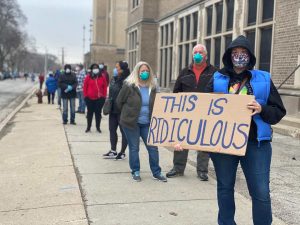 An answer to these questions is not easy to provide. In effect, the circumstances of the pandemic outbreak give rise to an ethical tension, with each response having some important detrimental effects on core electoral values. In what is probably the most influential book on the topic, Dennis Thompson has outlined three principles of electoral justice: equality, freedom, and popular sovereignty. Since these principles are not particularly controversial, we may deploy them in order to illustrate the problem, which may be called the Pandemic Electoral Trilemma:

Let’s look at P2, P3, and P4, in turn. Consider, first, the option of holding elections in a traditional fashion, with in-person attendance at the polling station required in order to cast a vote. This option may immediately strike us as the least palatable, because of its expected effects on public health. With weeks or even months of restrictive measures taken in order to combat the outbreak, the social interaction required for holding elections would threaten to undo all progress obtained. But putting the public health issue aside, holding traditional elections would undermine the equality principle of electoral justice. Since COVID-19 disproportionately affects senior citizens and people who already have certain pre-existing conditions, the expected costs of attending the polls (risking to catch the virus in the process) would be disproportionately high for them, in comparison to other groups. This substantive inequality in the opportunity to cast a vote is a serious concern, particularly as the groups most likely to abstain are, by and large, more vulnerable to begin with and widespread abstention at the polls could lead to a further compounding of their disadvantage.

Consider, then, the option of postponing elections, which appears to be most widely deployed, at least for the time being. While public health concerns would suggest this option as the one which is least bad, political concerns regarding the postponement of elections abound, since the rules of the democratic game stipulate that positions of power are to be occupied by elected officials on a clearly time-limited basis. The principle of popular sovereignty is undermined by postponing elections, since without them the voice of the demos cannot be heard at the appropriate time. Without this voice, holding power becomes democratically illegitimate, a problem which is particularly worrisome if no time frame is to be given for the length of the postponement.

Perhaps, then, we should endorse a third alternative, which is to hold elections, but under distance voting mechanisms such as voting by mail or e-voting, rather than by in-person casting of ballots at the polling station. This is the option favoured, for instance, by Lee Drutman in the recent conversation had with Andrei Poama on the subject*. And it is an option which is not novel, since some elections already allow or are fully held through such mechanisms. But distance voting comes with its own drawbacks. The most obvious one is that of electoral fraud, which might not necessarily be widespread in current elections that use distance voting, but might be seriously worrisome if they are introduced for the first time in the publicly opaque circumstances of a pandemic, which do not allow for proper scrutiny or piloting. But putting this aside, distance voting also fails to protect one of the principles of electoral justice outlined by Thompson, namely that of freedom. Since ballot secrecy cannot be thoroughly ensured through e-voting or postal voting, the freedom to exercise one’s vote according to one’s own conscience is curtailed in clientelistic communities or patriarchal families, as power relations would be able to dictate how more vulnerable agents will vote, instead of their own reasoned preferences.

The Pandemic Electoral Trilemma suggests a grim conclusion. Of course, some might object to the existence of the trilemma to begin with. Perhaps P1 does not adequately capture what just elections are; or perhaps one of the subsequent claims are false; or perhaps there is a fourth category of policy options not yet explored. But what if we think that the trilemma does indeed exist, in the way outlined above?

My contention is that the right response would be to choose the electoral policy which can be supplemented with other institutional actions, that are able to go sufficiently far in alleviating the concerns raised by that policy option for electoral justice. Because the problems in P2 and P4 do not appear to be readily solvable through institutional measures, I suggest that the most plausible path would be to target the problem of popular sovereignty, caused by postponed elections. Without being able to develop it in much greater detail here, my tentative proposal is that the postponement of elections should be followed by a norm of forming national unity governments, which would include a coalition of political parties with parliamentary representation which is as broad as possible. Without fully extinguishing the problem of popular sovereignty, since the demos has not spoken in favour of this political configuration, it could be temporarily sufficient, as power would be shared in such a way so as to represent a wide range of interests within the demos, rather than the much narrower and possibly sub-majoritarian representation of interests under a one-party or even an approximately minimal winning coalition. Furthermore, in times of political uncertainty, a national unity government could also (1) be in the interest of both governmental and opposition forces, who would share the political costs and benefits both of holding power now and of electoral scrutiny for handling the crisis down the road, (2) be useful in staving off some of the more populist political measures, which could lead to worse outcomes, and (3) receive widespread support from citizens, as a recent YouGov poll suggests.

A few caveats are worth mentioning. First, it is possible that under a closer examination the trilemma would be softened either by the conclusion that the satisfaction of all principles is not equally important, or that the three principles are not equally affected by the various policy proposals. If this is the case, we may have reasons to favor a different policy proposal. Second, I do not mean to suggest that the proposal outlined above is necessarily optimal in all cases. Political culture and traditions as well as regime type are important features, since they may affect the degree to which problems generated by unveiling the vote will arise. Third, the proposed solution can only be pitched at some levels of the political system. Direct elections for executive offices (e.g. mayors) cannot technically be addressed in this fashion.

* The conversation is part of a series of Insights developed as part of the “Reconstructing Democracy in Times of Crisis: A Voter-Centred Perspective (REDEM)” project (http://www.redem-h2020.eu/).