The four-legged therapist: Why getting a pet to improve our mental health may be unethical

Every once in a while, I read news articles about the mental health benefits of owning pets. These articles always leave me feelings uncomfortable. They seem to ignore what appears to be obvious: these benefits are the side-effects of a positive, caring relationship with a member of another species, and getting a pet will not necessarily improve our mental health. One would hardly suggest that someone should make a friend, get married or have a child primarily, or even merely in order to improve their mental health. 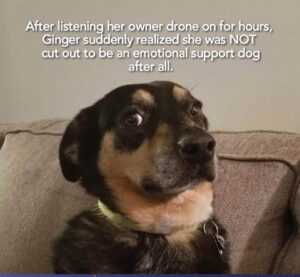 Yet it is easy to find suggestions that we should get a pet to feel better, physically and mentally. According to a 2021 survey Human Animal Bond Research Institute “22% of pet owners had a pet recommended for their health by a doctor or therapist” and “89% of pet owners agree that doctors should recommend pets to patients for healthier living”. Benefits are supposedly as varied as lowering stress hormones and blood pressure, helping with the social and cognitive development of children, acting as personal trainers who force their humans to exercise more and even improving people’s chances of getting a date, as in 101 Dalmatians. (Posing with someone else’s dog in dating site photos is called dogfishing.) Dogs are “very present”, therefore, apparently, natural mindfulness teachers. I just had to add this example, which was published after this blog post: the ten most empathetic dog breeds to help you with your anxiety.

In the UK, recommendations for owning or interacting with pets are part of the model of social prescribing by family physicians. The idea behind social prescribing is that medical services should recommend non-medical activities – exercise, group activities and so on – alongside medical treatment options, and help people in accessing appropriate resources to make this happen. While he was health minister  in the UK, Matt Hancock wrote about promoting access to pets as part of social prescribing. Most public schemes do not straightforwardly recommend pet ownership, but rather an interaction with companion animals. Thus, there are therapy dogs in schools, dog walking clubs at universities and many people and their animals volunteer to visit schools or nursing homes through organisations such as Pets As Therapy.

These recommendations are made despite the fact that evidence as to the actual mental health benefit of pet ownership is mixed, and most research focuses on interactions with dogs. Some studies found that owning a pet led to better mental health during the Covid-19 pandemic, but many studies found that pet ownership actually led to no better or worse well-being and mental health. If someone is already anxious about leaving the house, having to walk the dog is not going to help. (Author’s own pandemic experience.) Given the contradictory research findings, Ratschen and Sheldon point out that unlike most medical interventions, recommending interactions with animals and pet ownership is not actually evidence-based-medicine. Of course the real problem, as the same editorial points out, is the lack of concern with animal rights when we are only interested in the direct benefits of therapy animals to us. We can see the practical outcomes of this kind of thinking in the continued existence of puppy mills, the number of pets abandoned at shelters or just thrown out of cars in unfamiliar places.

All this captures one of the fundamental problems in human-animal relationships. Rather than seeing animal lives as valuable in and of themselves, we see animals as fulfilling a purpose. Thus animals become fully identified with their “jobs”: their role in the wider ecosystem (we worry about plummeting population numbers because bees or worms are so important for the environment), their “job” of providing us with food (to the point of being carefully bred, a slow form of genetic modification, to provide more and tastier meat, eggs, milk), or working alongside us as guard dogs, sheep dogs or companion animals.

Seeing our pets as close friends / therapists also reveals something  about how we view the minds and mental lives of non-human animals. Robot pets are often touted as a low-cost way of improving the quality of life of older people living with dementia. Nowadays we don’t tend to view real, live animals similarly, as machines that fulfill the function of, let’s say, being petted or walked. Still, this may be close to the view of some, like the person who claims to have flushed their “emotional support hamster” down an airport toilet after they were told they could not board their flight with their animal; surely a sign of an extremely low quality relationship. Instead, contemporary animal cognition research stresses that animals commonly kept as companions, such as dogs, have rich emotional lives, and are capable of experiencing emotions with equivalents in humans, such as love or jealousy. It is possible to assert this even without knowing exactly what these canine emotions are like, as we need not claim that their feelings of love are the same as ours, simply that they are analogous. Thus the benefits of interacting with dogs come from interacting with creatures that have a similar socially oriented emotional lives to ours. Our emotional lives appear similar enough so that with some familiarity we are able to “mutually sense each others’ emotional states” and respond to each other other in similar biological ways that we would respond to human touch, through producing oxytocin. Yet something is still missing from this picture. While it allows that dogs’ minds are sufficiently similar that we can form cross-species friendships, it denies them self-determination and the will to decide what kinds of interactions they are willing to take part in.

Just as human therapists are not chosen by lottery, we may also need to seek pets’ agreement to help us with our emotional needs. But is it possible for at least some pets, such as dogs, to agree in this way? Do they have an appropriate quality of will? Philosophers Richard Healey and Angie Pepper argue that this is possible. According to their theory of animal ethics, while animals do not have the capacity to give consent, they can assent to or dissent from interactions, similarly to human children. Dogs might do so by showing us whether they are enthusiastic about an activity (open body language) or opposed to it (backing away, signs of nervousness such as lip licking, growling). Different dogs will have different personalities and boundaries, physical as well as emotional. Of my two dogs one is very emotionally supportive and seeks out physical closeness,  while the other is still loving, but does not need or seek out prolonged physical interaction, and has correspondingly more rigid emotional boundaries. My first dog is most definitely an unofficial emotional support dog, and took on this role without any expectations on my part that this would happen. It would seem wrong to view my second dog in the same light and it would seem morally wrong to force her into this role. Forcing pets into uncomfortable and emotionally demanding situations is likely to be costly for them just as they would be costly for humans. A recent study found that (entirely unsurprisingly) pets living with stressed-out humans tended to be stressed-out themselves.

Finally, if all we are interested in are the benefits to our mental health, getting a pet may not be the easiest way of securing these. Puppies can be destructive, and exhausting to look after and train, even if they do look very cute. As most pets do not outlive their owners, many of us experience intense grief after the death of an animal friend. The oft repeated idea that dogs’ love is unconditional or that “animals give so much to us but they expect nothing back in return” also seems to be intuitively untrue. Keeping pets is costly both in terms of time and money: they require food, grooming, cleaning up after, vet visits and so on. Mistreated cats and dogs do not necessarily love their owners regardless. It would be cheaper to commit to giving £5 to a charity for every day we missed our daily walk than to get a dog just so we can take it for a walk which would then improve our mental health. Surprisingly, one newspaper article about the mental health benefits of owning a dog ends with: “But what if you don’t have a pet? Is there any shortcut to reproducing the beneficial effects? One candidate is sildenafil (Viagra). Having sex causes an oxytocin surge in the brain and taking Viagra may reproduce that surge without the faff of mating. A more practical idea might be an oxytocin spray or tablet.” Seeing animals capable of their own emotional lives as the kind of support which could easily be replaced by a pill seems ethically dubious practice at best.