Towards a feminist city 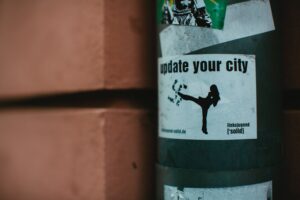 Historically, men and women have experienced the city in a drastically different way. Cities were built not for women, but for and by men. This male dominance in urban planning brought about hetero-patriarchal norms, which are based either on women remaining quiet in the private spaces or – if they access urban spaces – relying on the urban structure created by men. The persistence of those urban spaces creates barriers for women accessing transport, land and constrains their social activity and agency needed to exercise their political voice. This is the characterisation of an oppressive and non-egalitarian city in terms of the division of power and resources.

Empirically, numbers show that women, especially non-white women, experience the city via physical, socioeconomic, racial, colonial, and symbolic barriers. This is evident, for instance, in the lack of proper lighting in the streets and parks or in the absence of public spaces with safe recreational areas and children’s facilities, as reported by the Urban 20 White Paper. As a result, women spend more time at home, and sometimes risk their well-being when they go out. According to the inequality map of São Paulo, from 2012 to 2019, the violence against women in the city increased 63%, and the feminicide 33%. In Mexico City, 65% of women who used public transport in 2019 have suffered sexual harassment during their travelling journey. Other than that, male urban planning tends to overlook the challenge of women’s mobility in the city. In London, having a child in the house increased by  23% the number of trips women make; and in Buenos Aires it increased by 13%.

It is plausible to say that this is, per se, unjust; as it creates a scenario in which women are oppressed and are not treated equally. At first glance, these hetero-patriarchal norms shape women’s life: they cannot access urban spaces freely without feeling unsafe; they spend more time on public transport than do men; their political agency is excluded or denied in the urban planning.

Some feminists, such as Leslie Kern, argue that such an unjust scenario in cities creates a big problem which must be addressed, as cities were not built to accommodate women’s bodies. Kern points out that if male urban planning disadvantages women, a feminist city should be the solution. According to her, a feminist city is one without oppression “where barriers—physical and social—are dismantled, where all bodies are welcome and accommodated”. For her, this is an aspirational project and must focus on caring-centres, safe streets, and creative spaces for children, as well as on having an inclusive urban planning. Kern acknowledges that those changes will rebuild the city in an intersectional feminist approach, regarding gender oppression as interconnected with class, race and ethnicity.

Other feminists have supported an egalitarian resourcist-based approach as a practical way to guide the city to equality, by enhancing women’s economic ability and independence. This can be done by cash transfer programmes, or even reforms in the architecture of houses. Anna Puigjaner claims that it is crucial to be critical about the structure of buildings in cities, where walls and bricks are historically designed to support the hetero-patriarchal norms. Drawing on Silvia Federici’s work, when she acknowledges that the expropriation of women with no remuneration for domestic work represents the manipulation and the violence of capitalism against the working class, Puigjaner advocates that together with the remuneration of domestic and sexual work, as Federici suggests, houses should not have private kitchens, but a collective one. Crucially, she believes that, for many years, the kitchen was associated with domestic and sexual work and lost its economic value, becoming, in Federici’s terms, a “labour of love”, which makes women economically dependent on others for their well-being and political voice. Puigjaner proposes, therefore, to abolish kitchens at home and replace them by public and collective kitchens in the city for the economic and political liberation of women. In practical terms, there are already urban collective kitchens in few cities around the world, such as in Lima, Mexico City, Tokyo and Montreal. They are a collaborative project, and act to complement private kitchens. According to Puigjaner, these urban kitchens are used not only for cooking and eating but also for developing the local communities’ political voice.

Of course these proposals are insufficient, and it would be impracticable to demolish all the old structures of the city. However, they are alternatives that could help to transform some of hereto-patriarchal barriers. First of all, both proposals try to target the disadvantaged/advantaged groups, by creating more space in public areas for interaction and for the construction of social bonds between city-dwellers, which may increase the political voice and impact of women and other disadvantaged groups on decisions that affect their lives, thereby challenging the advantaged groups’ perceptions of otherness. Kerns suggests that safer and care-giving public spaces are needed, and Puigjaner considers that kitchens should go beyond private walls and become communal spaces for collective political agencies. Second, they are also sensitive to intersectional injustices, which affect women. This means that without criticising patriarchal, racial, colonial and socioeconomic systems, we cannot increase women’s political voice. Finally, both proposals explore the extent to which governments should not only focus on the consequences of gender oppression and socioeconomic inequalities, but also on how such oppression and inequality are formed and reproduced.

As I see it, Kerns and Puigijaner bring crucial contributions to the reflections of what a feminist city is, which, between the lines, should involve its habitants and local voices interacting with each other in public spaces. This is the first step for creating social bonds and exchanges capable of ensuring a sense of belonging and inclusion of those who were historically not welcomed in urban spaces.

Withdrawing and withholding treatment are not always morally equivalent