This guest post is written by Ben Sachs-Cobbe. Ben has recently published a book entitled Contractarianism, Role Obligations, and Political Morality exploring the connection between foundational questions in political philosophy and important issues in public policy, including the political and legal status of sentient animals. 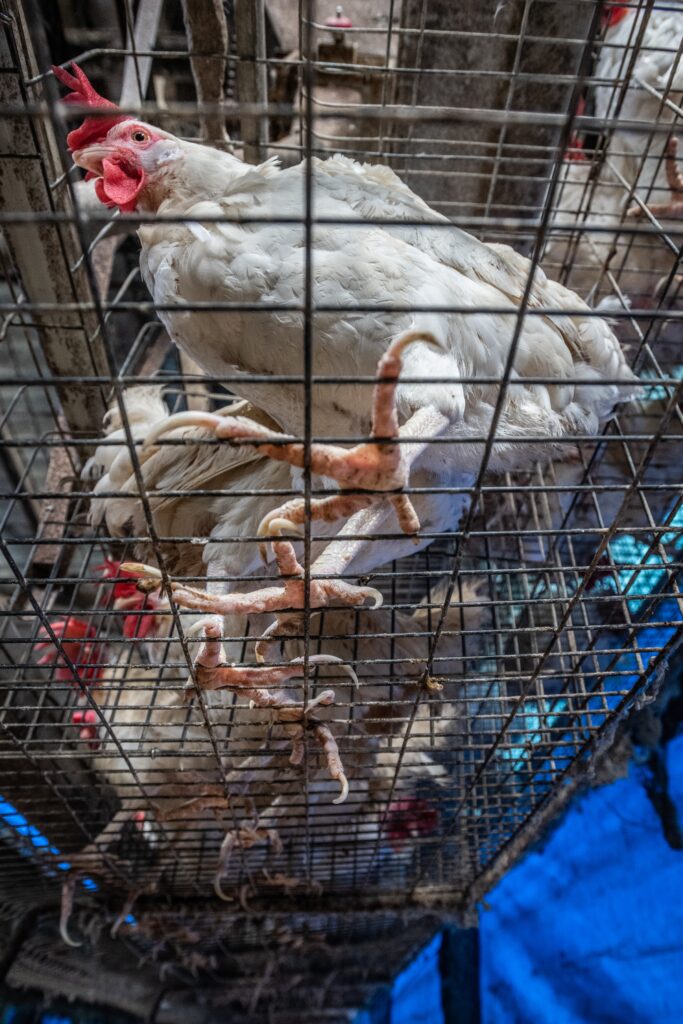 Factory farms inflict suffering on the animals they produce. At a young age animals are torn away from their mothers and mutilated to prevent them hurting themselves and others; they’re then kept in squalid conditions with their movement and access to the outdoors restricted while they grow at a dangerously fast rate; before they’re finally killed by a machine after a mercifully brief life. Estimates of the number of farmed animals produced for food worldwide each year range from 50-70 billion (not including fish), with anything from two-thirds to 90% of those being factory farmed. This is misery on an almost incomprehensible scale.

What should we do about this? Peter Singer famously maintains that the single most important thing that an individual can do is to stop eating meat and dairy. We can also spread awareness about what happens on factory farms and try to persuade others to adopt our diet.

But this might seem a pathetic under-reaction given the enormity of the moral wrong. Did those who objected to human slavery rest content with refusing to own slaves and putting moral pressure on slaveowners to change their ways? Of course not. They fought for abolition and eventually won it. Other practices in which the lives of some were treated as if they didn’t matter eventually suffered the same fate—e.g., child labour and traditional marriage (in which the wife became the property of her husband).

What would abolition look like in the case of farm animals? Some countries, including Germany and Switzerland, have conferred a new legal status on certain animals, though this is mostly symbolic. Meanwhile, charities like Compassion in World Farming and Animal Equality do the hard work of agitating for new animal protection laws and better enforcement of existing ones. These efforts are important and I hope they succeed. But when people talk of abolition, usually they mean stopping at nothing short of criminalising the running of factory farms and the purchase of their products. And this, I suspect, will strike many as too radical.

When we criminalize a transaction, we proclaim that the buyers and sellers are no longer citizens in good standing and we imply that there is no room for reasonable disagreement about the morality of the exchange. It is doubtful that we can send such a message without pitting those who endorse the message against those who feel cast out, disowned, made an underclass by it.

Fortunately, there is another route to abolition. We can start to sketch it out by noting, first off, that the law doesn’t classify each kind of transaction as either legally protected or criminal. There are various middle grounds, too. This means that if there is a kind of transaction that we disapprove of, we have ways of discouraging it that don’t send the moralistic message that criminalisation does.

What less moralistic message do we send when we place a transaction in a legal middle ground? My interpretation is that we thereby announce that we are—to borrow a phrase—separating the sinner from the sin. We announce that we have serious worries about the ethics of the trade but also understand why people want to partake of it. Furthermore, we maintain that whether or not the exchange is strictly speaking wrong we don’t want anything to do with it. We refuse to facilitate it or legitimate it.

As to how the law can be altered to stop it facilitating the trade in factory farmed animals, without criminalising that trade, here are four potential changes:

What would become of the factory farming industry under this new regime, which we might call ‘delegitimation’, as contrasted with criminalisation? The obvious worry is that by delegitimising factory farming we drive it underground, and thereby potentially worsen the already deplorable conditions under which factory farmed animals are kept. To underline the case for being cautious we need look no further than the drug trade, which in some jurisdictions occupies a legal middle ground and continues to be dominated by violent cartels and gangs. But the trade in previously criminalised drugs thrives, in many cases, on addiction and mental illness, leading consumers to take inordinate risks to make their purchases. It is hard to imagine a similar scenario playing out in this case, with people buying uninspected meat and dairy in cash from shadowy factory farms despite having no legal recourse should the products turn out to be tainted.

A more likely model of what might happen comes from California, where high-interest payday loan contracts have been deemed unconscionable and thus thrust into a legal middle ground. This hasn’t resulted in an increase in payday loan sharking; rather, would-be lenders and borrowers now strike payday loan agreements at the lower interest rates that are still legal.

If the law delegitimises one kind of transaction while keeping a nearby transaction legal, people will choose the latter. Those who produce meat and dairy and those who consume it are accustomed to thinking of themselves as law-abiding citizens and will look to maintain that status, so long as the law makes it easy. Fortunately, after we delegitimise factory farming it will still be legal to buy meat and dairy produced in a smaller-scale, more ethical way.

So, how do we achieve the abolition of factory farming without causing a dangerous social rupture? To borrow an expression from Richard Thaler and Cass Sunstein, we change the ‘choice architecture’ within which people decide whether to produce and purchase meat and dairy. Alter the legal framework in the right way, and factory farms will self-abolish.

Ben Sachs-Cobbe is a Senior Lecturer in Philosophy at the University of St. Andrews, working in moral, political, and legal philosophy. He is co-leader of the Future of Work and Income Research Network, under which he’s considering the question of on what basis an individual ought to be entitled to a share of society’s wealth.