There’s a longstanding debate amongst students of global justice and within popular discourse about the extent to which the ‘international order’ harms populations in disadvantaged countries. While some scholars argue that international trade agreements are exploitative or unfair and otherwise fail to work to the most disadvantaged, others caution against over-attributing the causes of global poverty to external factors. Instead, it is often said, domestic corruption and poor governance are at least half the story.

It’s true that global poverty and underdevelopment have complex causes and no single solution. But even if domestic factors matter, the fact is that certain rules of the international order can constrain domestic institutions in ways that perpetuate the plight of disadvantaged populations. In other words, the relationship between the global order and the dire situations often faced by disadvantaged populations in the Global South may sometimes be one of indirect harm, and yet such harm is nonetheless morally significant. The international investment regime, as I have argued elsewhere and will discuss below, is a good case of this relationship.

To start, the historical evolution of the investment regime is intertwined with the history of European colonialism. As historian Kate Miles has shown, investment law developed from imperial powers’ attempt to protect investors whose economic activities abroad often precipitated formal colonization. States had little recourse to an international investment law that granted special rights to foreign traders operating on their territory and whose governments were often willing to back them up by force whenever necessary. Moreover, today’s investment regime arose partly as a response to the waves of nationalization that spread through former colonies in the 1960s and 70s during the height of formal decolonization. As foreign assets and foreign-owned industries were seized by newly independent states whose governments vowed to work for the benefit of the local population, jurists in the Global North began designing treaties that would safeguard foreign capital from democratic control.

Today, the international investment regime consists of a body of >3,000 (predominantly bilateral, i.e. one-to-one) treaties that govern the practice of foreign investment. These treaties set out rights and obligations for host states (i.e. recipients of foreign investment) and investors, and as many commentators have argued, these often vaguely defined terms tend to be extremely favorable towards investors. For example, host states are expected guarantee investors ‘fair and equitable treatment”, which has often been interpreted as realizing foreign investors’ expectations, even when those expectations are unjustified. In one case, for example, a multinational company operating a landfill in Mexico had violated local environmental regulations. Yet when the Mexican government refused to renew their operating license, the company sued, alleging that this failed to uphold their expectations. The company won the case.

In another example, host states are required to secure ‘full protection and security’ for investors, which has often been interpreted as guaranteeing ‘stable conditions’ for investment. This means that host governments can be expected to employ law enforcement to crackdown on their own citizens’ protests and strikes, or face litigation from investors. These stable conditions may also be violated when a government tries to enact policies that might affect investors’ profits, for example, when, in an attempt to rectify the legacies of racial apartheid, the South African government passed the Black Economic Empowerment Act to increase Black ownership in key industries, or when the Egyptian government tried to raise the minimum wage. Investors sued in both cases. Even though the investor lost in the latter case, the Egyptian government still had to spend six years’ worth of money in defending itself against the charge–money that could have been used for important social ends. 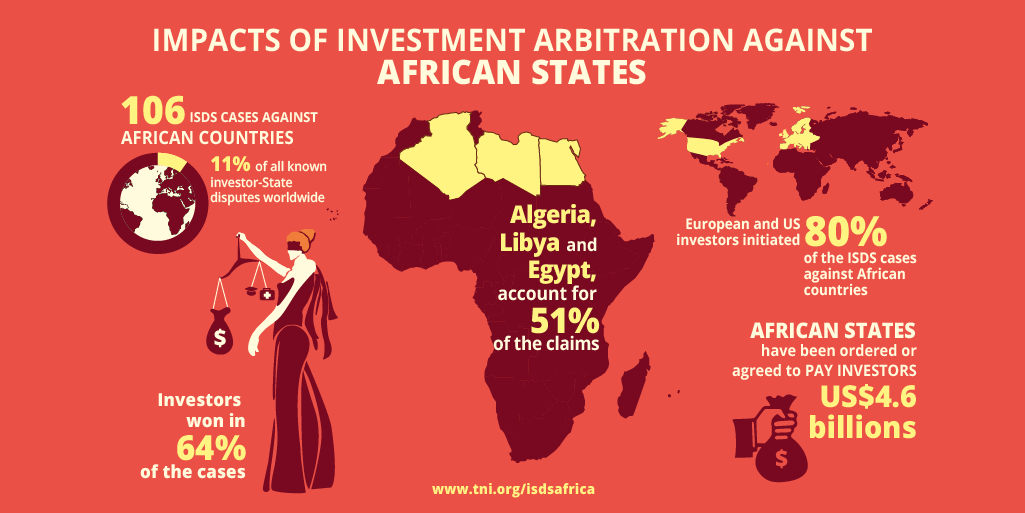 While investment treaties often include a clause that allow host states to take measures for public interest in exceptional circumstances of ‘necessity’, in reality it has been extremely difficult for host states to defend their actions as meeting this clause. Consider the case of Argentina. Following the 1998-2002 Great Depression, the multinational company CMS Gas Transmission filed a case against the Argentinian government, alleging violations of the US-Argentina bilateral investment treaty. Amid widespread riots and violent protests, staggering unemployment, rapid resignations of top government officials, a bank run and massive capital flights, the Argentinian government had declared a state of emergency, and pursued measures to halt the crisis including freezing utilities price hikes and unhitching the peso from the US dollar, effectively suspending multinational utility companies’ right to calculate tariffs in US dollars. The tribunal hearing the case, however, decided that the Argentinian government had failed to meet the necessity requirement, and awarded US$133 million plus interest to the company.

In other words, the terms of investment treaties have been interpreted in extremely restrictive ways, to the detriment of legitimate government action. Most recently, in face of an unprecedented global pandemic, legal experts have warned that many states’ emergency Covid-19 measures may attract future waves of litigation from foreign investors.

When investors sue host states, they do so under a controversial provision in these treaties called ‘investor-state dispute arbitration’, which effectively allows investors—i.e. private individuals and corporations—to sue host states in an ad hoc international tribunal. The tribunals are made of up three judges, at least one of whom the investors have a right to appoint. These deliberations are often confidential and concealed from the public.

So how does the investment regime harm disadvantaged populations across the world?  The answer should be fairly clear by now: the investment regime is a classic case of an international institution constraining domestic governments from doing what they are mandated to do: protecting the interests of the people. Instead, the regime creates what legal scholars call a ‘chilling effect’, where governments are reluctant to enact or enforce policies that might attract litigation from investors, even when those policies are needed to secure the rights and welfare of their citizens.

Still, we might wonder, aren’t capital-poor countries better off as a result of the international investment regime? Compared to the counterfactual of no investment at all, it seems like the regime has at least created some opportunities for economic growth. So how can the regime be harming citizens of these countries?

The first thing to clarify is that it remains unclear whether these treaties are actually pivotal in bringing in foreign investment. Scholars of international political economy differ on this, and the debate is far from settled. But even if investment treaties have been successful at spurring economic growth, we still have to distinguish between benefits to countries as a whole, and benefits to citizens—especially disadvantaged citizens—within those countries. Treaties that discourage governments from carrying out social redistribution, for example, might contribute to a larger GDP, but we should sketpical that that in itself reflects benefits for the local population. For good reason, scholars of development have largely moved away from using GDP per capita as the sole or even primary measure of a policy’s improvements to individuals’ lives.

More importantly, it is not obvious that the economic benefits brought by these treaties always outweigh other policy objectives that citizens may have an important interest in pursuing. Without the South Africa-Italy bilateral investment treaty, for example, perhaps the employment opportunities brought by foreign firms would not exist in South Africa. But there would also be one fewer obstacle to restructuring the ownership of domestic firms to empower black South Africans. Why should we think that increased employment and some GDP growth from foreign investment necessarily outweigh the importance of addressing historical injustice? Instead, it seems more accurate to say that some important interests might be setback as a result of a given institution, even as other interests might be advanced. In these cases, individuals still retain a legitimate complaint against the institution, which gives us reason to keep looking for alternatives, rather than settling for the status quo.

In face of all this, there have been increasing calls to reform the investment regime and some Global South countries have taken it into their own hands by withdrawing from investment treaties and designing new terms of investment that allow greater regulatory space. Yet for most countries relying on foreign capital for economic growth, repudiating the current investment regime is not easy. Among other things, doing so requires re-imagining economic growth to depend less on global capital. Numerous visions and proposals for a different kind of economic development have been put forth by social movements across the world, but political will is needed to pursue such experimentations. Yet we as citizens have reason to support these searches for alternatives, whether that is pressurizing our own governments or supporting activist efforts abroad. The case of international investment shows us that the international order can indeed harm disadvantaged populations by constraining their governments from responding to their interests. Bearing in mind the possibility of indirect harm when thinking about global injustice should clarify rather than obscure our responsibilities towards one another.

Why Property-Owning Democracy is Unfree