We are in the midst of an emergency. Drastic action by states, businesses, and individuals is required if we are to avert the most disastrous effects of climate change. Activism is a necessary part of and precursor to this action. And increasingly it is disruptive climate activism that is being advocated and engaged in. To many people, this kind of activism will seem morally controversial and perhaps even unjustified. But is it? And, if so, why exactly? Let’s examine three worries one might have.

One fairly obvious reason for thinking that lots of disruptive climate activism is morally controversial is the fact that much of it is illegal. This is true of the recent Insulate Britain demonstrations, for instance, which violated court orders banning the group from protesting on motorways and major roads in England. 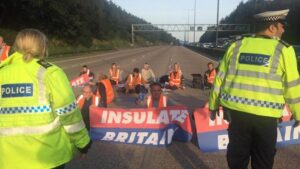 In order for it to be about law-breaking as such, this worry must presuppose that those who engage in illegal climate activism have a moral duty to obey the law because it is the law. This means that they have a duty to do as the law commands, not because of any independent moral appeal of what is being commanded (e.g., because the law prohibits murder and murder is wrong anyway), but because the law has commanded it. This is known as a ‘content-independent’ duty to obey the law.

The problem with the law-breaking worry is that it is not clear that climate activists – or citizens in general – have content-independent duties to obey the law. There are serious problems with all of the arguments that have been offered to establish this duty. Perhaps the most significant problem is that most of the arguments offered insist that, in order for the duty to exist, the political system that produces the laws in question must be a more-or-less just and democratic one. Political philosophers tend to agree about very little, but many would concur that few if any contemporary (or historical) political systems meet this condition.

A common complaint raised against disruptive climate activism is that it is inconvenient. For example, this was often said about the Extinction Rebellion protests of April 2019, when the group occupied sites across London for almost two weeks.

However, it is important to note that not every act that inconveniences another is morally controversial. If a highly qualified and impressive candidate applies for a job that I am also applying for, then this person’s actions are causing inconvenience for me and all of the other people applying for this position. But it is not clear that this kind of behaviour stands in need of moral justification. What this suggests is that it is not inconvenience per se that needs justifying but inconvenience that threatens interests that are important enough to be protected by rights.

There is likely to be lots of disagreement about what interests actually fall into this latter category, of course. And even where there is a consensus about those interests, people may disagree about whether a given action actually threatens them. But this shouldn’t undermine the significance of the broader point. To illustrate, consider the following suggestion. While a demonstration that forces you to take a slightly longer route to get home isn’t morally controversial, an occupation that makes your home completely inaccessible for days on end is. And what explains this difference is that you don’t have a right to be able to always get home via the quickest route possible, but you do have a right to some reasonable level of access to and from your home.

Moreover, even when a form of activism does actually threaten rights, this fact doesn’t settle the question of whether or not it is justified. One can value rights very highly without thinking they issue absolute, exceptionless prohibitions. Here are two ways to justify making exceptions. First, and most obviously, if someone attacks me without justification and the only way that I can defend myself against their attack is to impose some proportionate level of harm on them, then many would agree that the attacker lacks a right not to be subject to that level of harm. Alternatively, some people think that rights against harm can be overridden if this is necessary to avert a much, much greater evil.

In his recent book, ‘How to Blow Up a Pipeline’, Andreas Malm suggests that climate activism should include some selective sabotage of key fossil fuel infrastructure and carbon intensive luxury vehicles. Clearly, such actions would threaten interests typically thought to be protected by rights. Though Malm doesn’t appeal to them explicitly, it seems that one or both of the arguments just highlighted might need to be invoked to justify his position.

There is indeed a connection between the inconvenience that a protest generates, on the one hand, and the effectiveness of the protest, on the other. But this connection is not as straightforward as it first seems. If the point is to draw attention to a little known or often ignored cause, then creating inconvenience can be a useful means by which to draw this attention.

It is true that this may lead to the activist group creating the inconvenience being viewed negatively. But, as Oscar Burglund and Graeme Hayes wisely note, ‘[d]irect action groups aren’t running for elections’. The point is not for the activists themselves to be popular but for the causes they champion to get a hearing. Extinction Rebellion’s activities in April 2019 were followed by a surge in concern about the environment, and concern about the environment has remained relatively high ever since. Nevertheless, many more people have a negative view than have a positive view of the group (49% vs. 29%).

Even if most people believed that disruptive climate activism was counterproductive, this wouldn’t necessarily reflect the reality of the matter. The nonviolent protests of the civil rights movement are now often held up as the paradigm of successful activism, but most Americans at the time thought these methods were harming the protesters’ cause. With the benefit of hindsight, it is extremely hard to believe that it would have been helpful to the cause of racial justice in the US for those who engaged in sit-ins and mass demonstrations to have been less disruptive than they were.