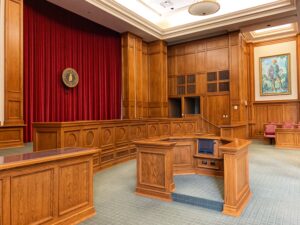 This is why we often think that what someone says is private is more likely to be true than what they say in public. And it is why we are apt to believe a person’s private claims over their public claims when their claims conflict.

My suggestion is that we can harness this bit of common sense to better discern the truth. Of course, we often cannot compare a person’s public statements to their private ones. It is precisely because people expect their private claims to be kept private that they tend to be more honest in private settings.

In order for my suggestion to be useful, we must identify times when people’s publicly available statements are most likely to be true. One type of time immediately comes to mind: when someone is communicating with a court of law.

Often, the consequences of getting caught in a lie are small. But this is not so in a courtroom. Those under oath risk criminal charges for lying. And lawyers, regardless of whether they are under oath, risk disbarment or other sanctions if caught lying in court.

Thus, as a general rule, we should be more inclined to believe that someone is telling the truth when they are speaking in court or have written something that has been submitted to a court.

Of course, this method is not perfect. People still lie in court. And lawyers frame the facts in a way that will be favorable to their clients. Still, the legal process is designed to root out lies.

Kenji Yoshino, the Chief Justice Earl Warren Professor of Constitutional Law at NYU School of Law, has noted the power of courts in this regard in his book Speak Now: Marriage Equality on Trial.

Yoshino writes that “[s]tatistical claims that circulate for years in the mainstream political arena can be refuted in a matter of minutes on the stand” and that the greatest strength of the U.S. court system generally “is an obsessive commitment to factual accuracy.”

We all can benefit from a court system’s commitment to factual accuracy, if we know how to do so. Thankfully, the internet has made it easier and cheaper to find many legal documents online. This is true for many jurisdictions around the world that seek to uncover the truth through judicial proceedings.

Thus, when there is a court case about a contentious public issue, one way to seek clarity is to look at the available legal documents.

If you’re looking for a quicker way to vet news sources, pay attention to which news sources make it easy for you to fact check their claims by linking to court documents. If you find that certain news sources are consistently reliable in their reporting of court cases, this provides you with additional epistemic grounds to believe reporting from those sources in the future. This can allow one to create a sturdier epistemic framework from which to engage the world.

So whether its sorting out claims about voter fraud in the 2020 election, or determining if you ought to treat a political commentator’s claims as fact, be more inclined to believe and rely on claims when they’ve held up in court.