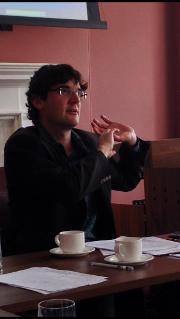 Lisa Herzog (LH): Hi Rowan, thanks for doing the interview with us. To start, can you tell us a little bit about what you work on in your research?

Rowan Cruft (RC): The main topic I have thought about for ages has been the concept of rights, thinking about it in all its different appearances. I’ve focused in particular on human rights and property rights, and on the distinction between natural moral rights – which I think do exist – and the rights we create. One of the things I did was to set up a network for thinking about the concept of human rights, bringing together a group of philosophers with practitioners, where we discussed various aspects of human rights. We also did one meeting on freedom of speech and freedom of the press – that might have been why I got approached…

LH: … indeed, that’s what I want to ask you about. In 2012, you got involved in the Leveson Inquiry. Can you tell us what this was and what your role in it was?

RC: The Leveson Inquiry was a public inquiry, set up by the government after a number of scandals in the press, especially about phone-hacking by journalists. It was meant to explore the “culture, practices and ethics of the press.” If it had been set up today, it would probably cover online issues too, but at the time, the focus was on the press.

I got an email, out of the blue, asking whether I would be interested in participating, followed by a formal letter with a list of questions to answer for the Inquiry. The Inquiry’s procedures had some of the adversarial character of the criminal trial, in the sense that I and the other philosophers were commanded to be witnesses. We had to submit answers in writing, and then also go to the Royal Courts of Justice to answer questions put to us by the Inquiry’s counsel in person, and it felt very much like being questioned. But, of course, I knew what it was, and was excited to be part of it!

LH: So how would you describe the role of you as a philosopher in this process?

And while part of my role was to clarify the underlying principles, another part, I suppose, was just messing things up, in two ways. One was to distinguish sharply between (i) norms that should have the force of the law, or regulation, or public funding behind them, and (ii) norms that are really important, but cannot or should not be enforced in these ways, which concern the question, for each journalist, politician or citizen, of how to make a good contribution to the public sphere. You do not always want the full force of the law coming down when journalists go wrong – even if they do go wrong.

The other was the sense, sometimes implicit in the debate, that ‘public interest’ was the same as ‘what the public happens to be interested in’. That seemed obviously wrong to me! ‘Public interest’, however you spell it out, is something else – maybe our interest in living together, a common interest. People were in fact very receptive to that, but it was still worth saying!

So it was partly about challenging the way the Inquiry had conceptualized things, seeing it as something else than just a trade-off of different interests.

LH: Did you feel that your contribution made a difference?

RC: The statements by me and the other philosophers did end up in the report – people were really receptive to what we had to say about the value of the public sphere. They were also reflected in the recommendations, in the sense that the accountability structures that were suggested did take into account some of the considerations we had brought forward, about the need for media oversight to be genuinely ‘the public’s’: at arm’s length from the state, but more than self-regulation. The press and the public sphere have a complex relationship, and quite a bit of thought went into what that would mean for press regulation, which needs to have some independence.

These recommendations were not fully implemented, though. Some were implemented for a number of publications, with a new independent body that approves independent press regulators. I’ve continued to advise the one new regulator approved by this body, through my contacts with practitioners that I had built before. But this approach has not been pursued by mainstream newspapers, which of course have most readers. Mainstream newspapers continue to be regulated by an organization that has not sought approval from the new body. And yet, it is some kind of progress, the new regulator concerns 10 million readers after all. And for the rest of the press, there has also been a sense that they need to change their tune a bit! So, in addition to the effect on regulation, my hope is that there is an effect on the practice of the press as well.

LH: When philosophers get involved in policy advice or public consultations, that raises interesting questions about their role in democratic societies. How would you characterize the contribution that philosophers can make?

RC: Well, I don’t think it’s about ethical expertise; I think ethical expertise is spread out among lots of people with different life experiences. For philosophers, there is the task of conceptualizing the phenomena, clarifying assumptions, making values explicit, making sure there are no hidden assumptions, etc. But there is also something else – which I found makes lots of people, in different areas of life, quite receptive to listening to philosophers. And that’s that there is an expectation that as a philosopher, you are oriented towards the truth, or where talk of ‘truth’ seems misguided, you are oriented towards collaboratively reaching decisions through understanding their independent merits. You’re not speaking strategically or instrumentally, as many groups in public discourse do, because they have particular interests – whereas the role of the philosopher is different. Even when you say something that may seem kind of obvious, this orientation towards independent understanding makes a difference. Or that’s how I see it. Of course philosophers are often as biased and partial as everyone else, but I think they have a distinctive role-based duty not to be. This special role is in itself a valuable contribution to public discourse: I hope it helps everyone to form a more rational view, and also sets an example of the kind of inclusive, open critical reasoning appropriate to the public sphere.