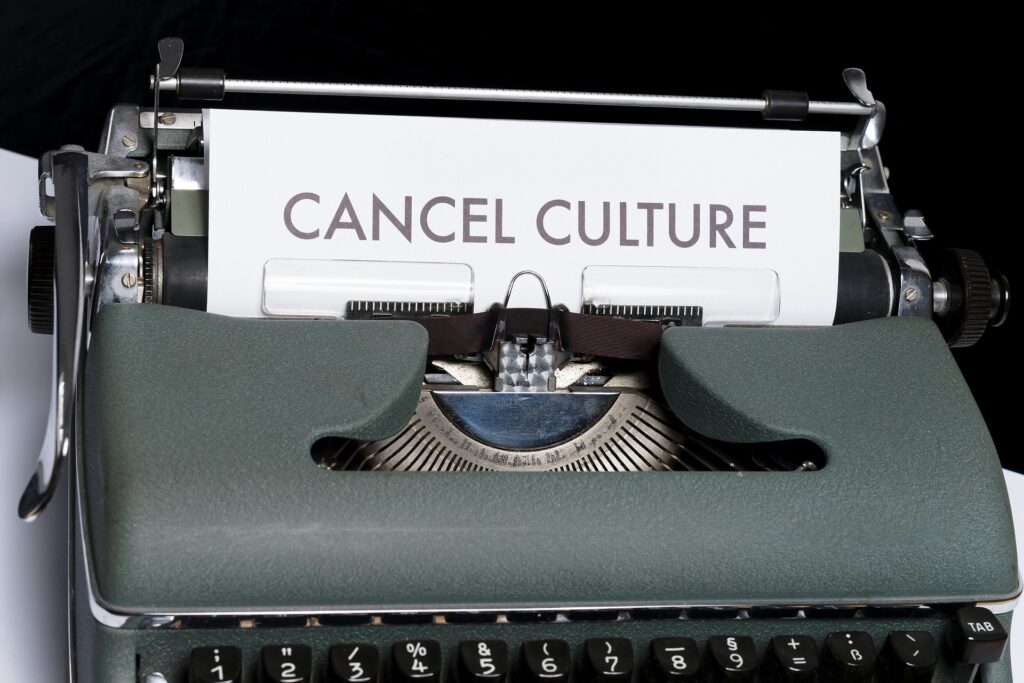 Let me start by providing a definition of cancel culture free of its loaded meanings when employed in contemporary ideological controversies. In her manuscript, ‘An Ameliorative Account of Cancel Culture’, Simone Gubler identifies cancel culture as a constellation of practices of condemning public figures accompanied by the demand to have their public platform or position in society taken away from them. While we are used to hearing critics bemoan the dangers to free speech and inquiry that such practices engender, Gubler eloquently argues that cancel culture is not in principle unfair as: 1) no one is entitled to public status – a privileged position is always the gift of the public, which is permitted to strip one’s higher standing away; and 2) the public may hold a legitimate expectation for public figures to act as exemplars and subject them to increased scrutiny as a price for prominence – including retrospective scrutiny for past beliefs and behaviours which now appear inappropriate in light of norm change.

We might, then, think cancel culture is good for women. First, cancel culture gives women everywhere the power to publicly express dissent and moral outrage in previously unavailable ways. The public nature of cancel culture gives women the means to openly question and contest sexist beliefs and behaviour, in line with the perennial feminist demand of bringing public scrutiny on private matters. Second, women have been net beneficiaries of norm change. The vocabulary developed since the 1970s to describe the sexist treatment of women and the renewed scrutiny of previously normalised practices of harassment since the #metoo movement in 2017 paint a picture of norm change towards more egalitarian gender relations. Cancel culture emerges as a potential means of chastising past sexist behaviour which was not sanctioned as wrongful at the time. Cancel culture thus seems to exhibit some of the desirable effects of having a public sphere that is in principle critical of existing power structures, and as a means of bringing our imperfect public realm closer in line with the demands of gender equality.

Nevertheless, this account of cancel culture overlooks important aspects of the gendered social reality it attempts to change.

It is certainly true that cancel culture democratises the power to sanction transgressions, but democratisation does not mean equality. First, ‘the public’ is not devoid of the effects of power structures. Consider how the contemporary public sphere was shaped by significant exclusions along gendered lines. In developing the notion of a feminist counterpublic, Nancy Fraser surveys the fascinating genealogy of the public sphere in liberal democracies. She puts together Joan Landes’s findings that masculinist gender constructs were built into the French republican notion of the public sphere – a ‘rational’ and austere space presented deliberately as being in opposition to the ‘effeminate’ woman-friendly salon culture – and Geoff Eley’s inquiry into the network of civil, professional and cultural associations that came to form the public in England and Germany Eley traced the gender exclusionary dynamics behind constituting the public sphere, showing that far from being accessible to everyone, it was instead ‘the power base of a substratum of bourgeois men, who were coming to see themselves as a “universal class”’ (Fraser, p. 60).

‘The public’ is hence not a space where existing inequalities are neutralised, but a site of struggle between the groups falling comfortably within what we commonly identify as ‘the public’, and forms of expression characteristic of what Fraser calls ‘subaltern counterpublics’, comprising members of subordinated social groups. To have the power to cancel – and even the power to count as an ‘outraged public’ – contestations need to gain the assent of a significant enough share of voices that are seen as constituting ‘the public’ for them to be successful in stripping public figures of their privileged status. Otherwise, cancellation by (progressive) pockets of ‘the public’ may lead to increased esteem and influence in other, potentially more privileged public arenas. The rise of right-wing provocateurs going to left-wing college campuses to make their careers by being ‘cancelled’ – such as Milo Yannopolous, Ben Shapiro and Ann Coulter to name but a few – show that complaints for being ‘cancelled’ are compatible with receiving an even wider platform and esteem. What makes this possible is, as shown above, that the cancellation and the esteem come from different parts of the public.

Cancel culture may be inefficient in bringing about a just state of affairs given the fragmentations within ‘the public’. But its reliance on the public’s (violated) normative expectations also opens it up to accusations of unfairness. The election of Brett Kavanagh and Donald Trump to positions of great power despite sexist conduct shows not everyone is equally susceptible to being cancelled. Public attitudes captured in phrases like ‘boys will be boys’ show there is a tendency among ‘the public at large’ to excuse male transgressions, a privilege women do not enjoy. This gendered response to an individual’s merits and shortcomings is well-established in the psychology of discrimination, where Uhlmann and Cohen, for instance, showed that participants asked to assign male and female applicants to jobs, redefined essential criteria of success to match the credentials of the preferred (usually male) candidate. Because of such gendered attitudes, the practice of cancelling those who fall below ‘our’ normative standards may have disproportionate effects on female public figures. While privileged men can weather out substantial outrage over egregious accusations, even comparatively minor transgressions from women could lead to them being cancelled since they are perceived as being just barely there. Thus, instead of spending efforts combating discourses that ‘cancel culture has gone too far’, progressives should instead question which cancellations are effective and why, and how the speed with which different publics wake up to norm change affect members of disadvantaged groups who now enjoy positions of power in some areas of society.