An audience in a lecture hall

How do you get undergraduate students excited about philosophy? How do you show students that studying philosophy isn’t just about reading complex discussions about the nature of reality? Philosophy teachers the world over are increasingly facing external pressures – from Rate my Professor to government funding bodies and everything in between – to make their courses popular, engaging, or “useful”. Many are also aware of other factors that may encourage re-thinking the way in which we teach philosophy and to move away from traditional  styles of teaching, for instance concerns about accessibility or Western-centrism. One of the things this series, Teaching Philosophy in the 21st Century, sets out to do is to canvas different ways of teaching philosophy. We hope that these discussions serve to inspire and provide ideas for those considering adopting different ways of teaching and assessing students.

For this post, we spoke to Dr Sjoerd Griffioen and Dr Merel Semeijn from the University of Groningen (Netherlands). They run a module called Buiten de Muren (Outside the Walls), which is a required module for second year BA Philosophy students. In the module, students identify a societal issue they want to tackle, a relevant ethical theory or concept (broadly construed), and create a creative final product. ‘We really ask them not to write a standard academic paper about it, or do a standard presentation, but to really come up with something else – because it will probably be the only time in their academic career that they can do that’, Griffioen says. ‘Of course we supervise them very intensively. Because it does happen that students start with a brilliant idea but then they run into problems and we have to turn them towards something that might be a bit more pragmatic. But the principle is that we give them a lot of freedom to come up with something other than a standard academic paper. “Outside the Walls” means to think outside the walls of academia – outside the box, if you will.’

In addition to thinking outside the box, the module also requires engaging with others. One of the requirements students must meet is to interview or talk to people outside academia – for instance, in a sector where the societal issue they wish to address is particularly prominent. Students interpret this in very different ways: Some focus on talking to people in companies, ‘because of the very obvious employability aspect of it’, according to Griffioen, whereas others talk to people that work for NGOs or are somehow involved with their chosen societal issue.

It is not surprising a module like this exists at the University of Groningen. The university has a history of “empirical philosophy [in Dutch]”: an approach to philosophy in the continental, post-post-modern tradition, which is very engaged with society. Notable proponents of this tradition include Lolle Nauta, Hans Harbers, Rene Boomkens, Judith Vega and Thijs Lijster. Harbers in particular ‘was quite an example for me in showing that philosophy should be aware of its place in society and not stick to the ivory tower – basically that you’re already intervening in society by talking about society, and to be aware of that as well as the ethical implications’, says Griffioen. This attitude is clearly reflected in Buiten de Muren. A similar module called Filosofische Interventies (Philosophical Interventions), convened by Dr Marc Pauly, is available to students on the MA in Philosophy and Society. It predates Buiten de Muren by a few years.

What do the students produce? 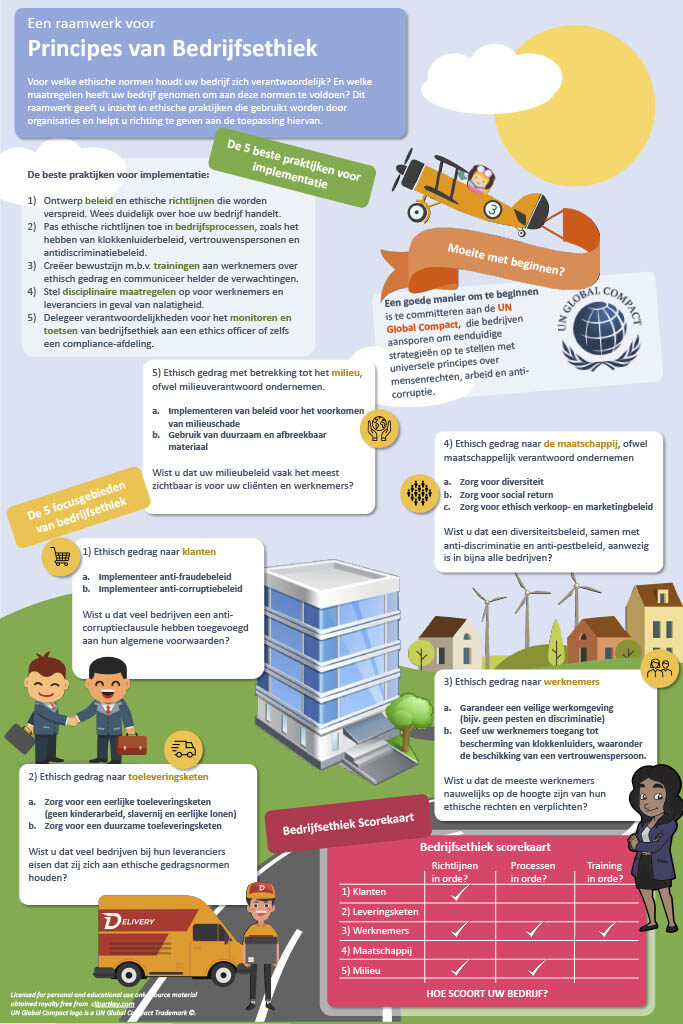 A poster produced by students on the course, outlining core elements of Business Ethics in an accessible way

As is to be expected with a module which gives students this amount of freedom, the final projects cover a wide range of important societal issues and philosophical theories. ‘I really liked the one where the students talked about mental disorders and identity. They made a nice video about that where they interviewed people with mental disorders about whether they thought their disorders were part of their identity or whether they stood in the way of “becoming their true self”’ Semeijn says. ‘But there was also a group that made an infograph which is a guide for companies to check different ways in which their company is ethical or not. And to provide ideas for how they can change their policy to address particular issues.’ Other students created a philosophical walking tour of the historic city of Groningen, which consisted of a website (sadly no longer available) where you could read short philosophical texts that asked you to contemplate particular issues based on various locations – for example, next to the Korenbeurs, which used to be a big market, there was a piece about Karl Marx and commodity fetishism. One group of students published an opinion piece in a national newspaper, about consent and sexual violence [in Dutch]. Other final products last year included podcasts, videos, training materials and even an art exhibition.

What are some of the obstacles faced by students?

Naturally, with all this freedom, things can become a bit tricky to supervise. ‘Students can go a bit rogue with their topics’, suggests Semeijn. ‘They can find it difficult to formulate the right question, or they formulate a question where it’s very difficult to find someone to interview for.’ This is partially because it’s a second year undergraduate course, so students often need quite a bit guidance. Students also find it difficult to come up with a societal issue and to turn it into a research question – especially because it’s not just a purely academic project, but also something that is supposed to have some value to a non-academic audience. This is part of the role of the supervisors: ‘it’s something they are not used to, and it really requires a lot of guidance’, says Griffioen. This problem was amplified last year, when he taught it for the first time, because of the COVID-19 restrictions. Many businesses were already struggling, and so weren’t particularly interested in talking to a group of philosophy students. ‘Students ran into a lot of closed doors. They had really nice ideas at the start, but couldn’t really make it happen – and then they tried to come up with something anyway. And while the end results were still nice, still good, they were a bit less than what they wanted to do at the start.’

Some of this is of course the result of the pandemic and should be less of an issue when restrictions are eased. But to further help students’ projects succeed, Griffioen and Semeijn are also trying to set up a collaboration with the University of Groningen’s Kenniscentrum Filosofie, a philosophy outreach centre ran by the Faculty of Philosophy. The idea is to use the connections created by the Centre to place students with businesses and organisations, so they have some ready-made projects to choose from.

Another issue that came up is that it is relatively low-credit course (2 ECTS). But students have a tendency to get over-enthusiastic and what they come up with costs a lot more work and effort than the 2 ECTS stand for. So it becomes important to stress to students that they shouldn’t spend too much time on their project, and to remind them that they also have other work to do. But, as Griffioen points out, this is an embarrassment of riches – because it shows that students really want to put in the work, and after a while they no longer care about the credits. ‘I really like that, but still, as a teacher, I’m obliged to say be mindful that you also have other courses, you also have other exams. That’s one thing that we do have to emphasize a bit more, this year.’

Finally, both Griffioen and Semeijn are hoping to see even more creativity in future editions of the module. Perhaps in part because of COVID-19 restrictions, the outputs last year were mostly written pieces, short documentaries, and so on. As Semeijn says, ‘it is of course still allowed to do an opinion piece, but it would be really nice to stress a bit more that students find new ways to express their ideas.’ Griffioen agrees: ‘I’m interested to see if there will be even more wild ideas – like a song, or a dance.’

Any advice or suggestions?

For those who are thinking of setting up a similar module, or incorporating elements into their own teaching, Griffioen and Semeijn have a few crucial suggestions. ‘The first thing that comes to mind is that grading is very difficult with these kinds of things. Buiten de Muren is just a pass-or-fail course, and that makes a lot more sense,’ says Semeijn. Given the diversity of outputs – how can you compare an art exhibition to an opinion piece? – the only logical approach is pass-or-fail grading.

The other key consideration is that, as noted, because of the freedom given to the students to pursue their own projects it is necessary to offer fairly intensive supervision to ensure they all stay on track. As Griffioen puts it, ‘you can let them roam free, but you need to check in on what they’re doing otherwise they get lost.’ Moreover, as with all group work, there is a risk of some students losing interest, and forcing others in their group to do all the work. This is a particular risk with a module of this type, where students are allowed to come up with their own projects, often ones to which the students have some personal connection. ‘Maybe they started out with a very nice idea, but then they run into some closed doors, or some practical issues of another type, and then they lose their motivation,’ Griffioen says. This means it’s very important to manage students’ expectations going into the project, as well as re-motivate students when they face some issues, another reason why intensive supervision is crucial.

Overall, Buiten de Muren is an interesting and creative way to get students to engage with, and apply, some really complex philosophical concepts and theories. Looking at some of the final projects, it is clear that doing philosophy in this way provides students a playful, but by no means frivolous, learning experience.

Please get in touch with Sara Van Goozen if you would like to contribute, or if you have any suggestions (for instance someone who does something interesting and new in the classroom who might be interested in talking to us).