The strike is about two separate disputes. One on pensions and one on pay and working conditions. As this round of strike action looms I am reflecting on the pension strike last year when UCU members took 14 days of strike action.

The 2018 UK higher education strike was a formative experience for many of us, and there are many things I learnt from colleagues on the picket line and on social media.

However, I would like to discuss a suggestion that was made to me by a colleague at that time.

The suggestion is this: those of us who are on research leave, or who will not be doing any teaching on some or all strike days, should strike only on those days they will teach. Instead, they should work as required by their contracts and no more. Furthermore, they should use the salary that they receive to contribute to the Fighting Fund or local branch hardship fund to help support those who might not otherwise be able to afford to strike without great hardship.

A tactic like this deserves serious consideration, if we are concerned about how to make industrial action more effective. Three questions arise immediately:

The suggestion seems to rest on a principle of maximizing disruption. Some union members simply cannot cause much disruption through withdrawing their labour on those dates. Based on plausible assumptions, contributions to the strike fund can help maximize disruption by making it possible for others to withdraw their labour and thus cause disruption. The strike itself is premised on the idea that the disruption is what will incentivise employers to give in to the demands the strike ballot is premised on.

Alternatively, the suggestion could rest on a principle of causing a fair share of disruption or sufficient disruption. These might determine how much pay non-striking members are required to contribute to the strike fund, but for my purposes we only need to focus on disruption.

One reason to adopt the suggested course of action is that insofar as increased disruption increases the chances of success in getting the employers to accede to employees’ it is rational. So long as there are some others who can cause at least as much disruption as you and who wouldn’t otherwise do so, contributing to the strike fund, or even paying them directly, will increase disruption.

A second reason to adopt the course of action is that it helps promote their colleagues’ capacities to exercise their right to strike, in solidarity with their colleagues. If there is a moral right to strike, individuals should not only have the formal right to strike but also the fair value of such a right. In particular, we might think it is particularly obnoxious that it is precisely those who are most vulnerable, on the lowest pay, on precarious contracts who do most of our teaching that they can cause the most disruption by withdrawing their labour but as least able to do so without suffering hardship. Helping to promote colleague’s opportunities to exercise such a right is, I think, and important reason to follow this suggestion.

However, one cannot avoid the thought that when our union democratically votes to strike that we are required to do that specific thing, and not some other thing.

One could argue that solidarity requires us to go on strike alongside others. But the view that solidarity is only or best expressed by going on strike seems odd. Many of those who support strikes do so out of solidarity. Those family and friends who support striking workers by offering child care or providing meals and transportation, or simply sending messages of support. Solidarity can take different forms then. What matters, however, is that there is some sacrifice, and the sacrifice in question is at least partly to do with one’s wages, which would have otherwise been withheld. For this reason we can say that anyone taking up this suggestion does show solidarity with their colleagues. 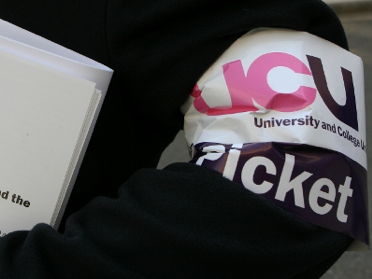 Another possible objection concerns union membership. As a member of a union you, plausibly, accept a duty to act as instructed in the case of industrial disputes. Strike ballots are democratic, but does this give rise to a duty to strike, and not to do something else that you think will be effective? Of course, you are agreeing to be bound by the decisions of the membership but we could reconceive this decision as being about winning the dispute not going on strike. If a union can win a dispute by entering into negotiation following a strike ballot, then, they should try to do that. If we conceive of the purpose of the strike to maximize disruption, then for some people that is striking and for others it isn’t. And perhaps unions should advocate or support this.

So I think that this suggestion is worth considering. On balance, I think the objections have good responses, but they are a little underdeveloped. I’d be interested in hearing your thoughts.