Public Ethics for Everyone: The Routledge Handbook of Ethics and Public Policy

In this post, Andrei Poama discusses the rationale for and contribution of a new book that he’s edited, together with Annabelle Lever on ethics and public policy. Andrei is Assistant Professor at Leiden University in the Netherlands. 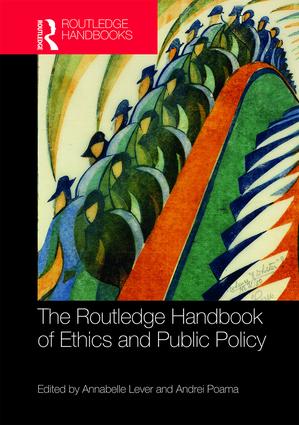 The Routledge Handbook of Ethics and Public Policy brings at least three contributions to current debates about public policy ethics.

(1) The first contribution is directly editorial. While there are many books, academic articles, op-eds and blogposts about public ethics, no existing publication (until now) portrays the state of the ethics of public policy as practiced today. Our Handbook covers this gap. It does so by bringing together 53 different prominent normative theorists (senior and junior, women and men, European, North American and Australian) in a volume that contains 41 chapters dedicated to distinct public policy areas. In so doing, the Handbook proves that public policy ethics is not a secondary activity that moral and political philosophers only engage with in their spare time. On the contrary, it testifies to the fact that public policy ethics is now a full-blown discipline impossible to ignore, one with its own theoretical identity, its distinctive problems, and its specific debates. As one of our reviewers (Iwao Hirose) puts it, the Handbook constitutes “the long-awaited manifesto for a new discipline in philosophy”.

(2) The second contribution is thematic. Our Handbook is premised on the idea that public policy ethics functions differently in democratic regimes, as compared to non-democratic ones. Public ethics is thus polity-dependent (or, more weakly, polity-influenced). In one sense, this is stating the obvious: democracy will matter for policy at different stages – for instance, in their choice, design or implementation. But the Handbook complicates this trivial statement in more specific (and potentially more contentious and fruitful) ways. It does so by showing that democracy covers a wide variety of moral stances and ethical principles, and it makes clear that their normative weight and scope might change with the considered public policy area. For example, democracy will have different requirements and set different constraints when we are examining waste management than it has when we think about taxation, trade or foreign policy.

(3) The third contribution is methodological. Public policy publications often tell more (or just as much) about their flesh-and-blood authors or their abstract philosophical positions than they do about the morality of the topics that they examine. In carving out the subject-matter of ethical reflection, philosophers have often given priority either to solving deep normative problems – as when they ask questions like should we be utilitarians or virtue ethicists about public morality or what is the correct account of right and wrong? or, at the opposite, have given in to telling long stories about their personal involvement in policymaking, as when they find themselves pondering on the lessons learned from serving in various ethics committees or when they reflect on their special duties as public intellectuals. Our Handbook resists both the high philosophy approach and the ordinary biography touch to public policy. Instead, we opt for a mode of ethical theorizing that puts policy practice first. By this, I mean that we take real public policies as they are currently deployed  to be decisive for the content of the ethical theory that those policies (as well as the practitioners acting within them) should take into account.

Our policy-first approach is reflected in how we selected the topics for the Handbook’s chapters. Given our focus on democratic polities, we initially set out thinking about the Handbook’s content by looking at the composition (that is, at the actual ministries and executive agencies) of governments belonging to different democracies around the world. Doing this was premised on the idea that, if it is true that public policy is what the governments do, a democratically sensitive ethical theory should start with thinking about what democratic governments do most. More concretely, this meant selecting public policy areas that are salient in the government’s executive and then looking for academics with ethical expertise on those policy areas. Philosophy, in this sense, tracks and serves policy practice, and not the other way around.

The Structure of the Handbook: A Short Summary

The Handbook is structured as follows. Part I prepares all the subsequent substantive discussions: it focuses on different models and methods of public ethics, it reviews and evaluates different styles and types of ethical theorizing about public policy, it reflects on the normative philosophers’ role as public policy theorists, and it addresses some more specific questions, such as the issue of moral expertise or the relationship between public policy ethics and cognate disciplines, like political and moral philosophy. Parts II, III and IV address various substantive public policy areas and they have a crescendo-like ordering. We start (in Part II) with public policies that seem constitutive of the act of governing itself (such as security, criminal justice, trade, foreign policy, military affairs but also education and the regulation of finances). We continue (in Part III) with public policies that are mainly addressed to the well-being and co-governing role of citizens within democratic polities (such as electoral, anti-corruption, disability anti-discrimination or healthcare policies). Finally, we end with a somewhat miscellaneous section IV that explores the way in which existential issues and questions of identity which have usually been the domain of individuals or voluntary associations are now becoming part of governmental action.

What’s Next? Public Ethics For Everyone

Our Handbook could serve as a platform for initiating a wider conversation about the contours of public ethics as a discipline and the voices that still need to be heard within it. Most importantly, I believe that our democratically sensitive policy-first approach should encourage non-philosophers – most notably, policymakers, civil servants, as well as interested members of the public – to reclaim their roles as active contributors to the discipline. The goal here is to push for a mode of doing public policy ethics that is both inclusive and interactive. The way in which this should happen – one can think of fora, ethics-focused citizens’ assemblies or different types of online networks – is a matter that is largely up for grabs and could be the goal of a future collective project in public ethics.