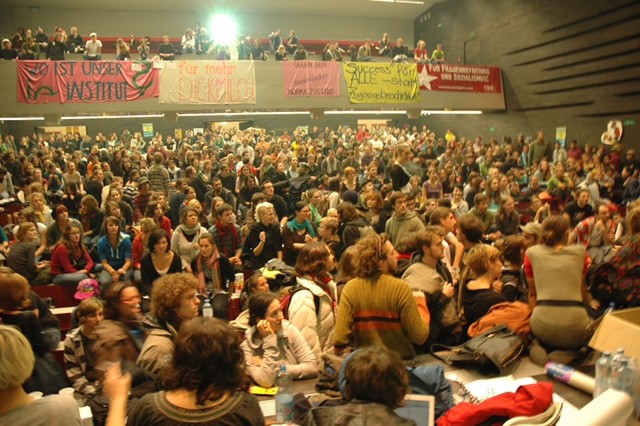 The occupation of the main lecture hall of the University of Vienna by students on October 22, 2009 as part of nationwide protests against a university reform. Photo credit: #unibrennt; under CC license on Flickr.

Political work in the university can be divided into four areas.  First, the university is a place of teaching. University teaching is transmission of knowledge and skills, but it is also in many respects not always politically neutral. Especially in the teaching of political philosophy, it can be assumed that certain political ideas come more to the fore than others, and this despite the claim to discuss several opinions and always counter-arguments as well. Some (racist, illiberal etc) opinions held by many people and some parties are simply not seriously supported with arguments by anyone in political philosophy. The teaching of political philosophy most often has a progressive undertone. However, university teaching is also a medium of political work in that it allows those teaching to disseminate their own political opinions. This does not have to be in the form of offensive agitation or indoctrination. The choice of topics and texts alone is often political. By the way, this has a long tradition – Hegel used his courses on the philosophy of law almost exclusively to present his own arguments and thoughts and did not care much about counter-positions.

In addition to teaching, research is also a field of political work on and for particular political ideas.  If someone argues that a Marxist social order is the just one (or at least more just than others) and backs this up with arguments, this is political. The vast majority of political philosophers do not do very much to make their political ideas a reality, but the mere development of an idea of a just society and writing it down and dissemination – even in the small circle of academic philosophy – is an act that brings this idea closer to realization than if it had remained only in the mind of its originator.

A third field of political work at the university is the so-called third mission, i.e., the attempt to communicate research for people outside the university.  This can be done – roughly simplified – either in a form that is more oriented toward teaching, i.e., presenting pros and cons, or in a form that is more oriented toward research, i.e., focusing on defending one’s own position. When a researcher writes an opinion piece or column or gives an interview for a newspaper, magazine, television, or radio, if it is about a political issue, it is a form of public political work and intervention. What also falls under third mission are any consulting activities for NGOs, political parties or government agencies. If an ethicist or political philosopher is an expert on how the challenge of autonomous driving cars should be dealt with and this expert then helps to prepare a position paper or even a programmatic draft for a (legal) regulation, then this is political work because it aims to influence politics.

The fourth field of political work at the university, unlike the three mentioned so far, does not arise from the specific nature of the university as a public institution of teaching and research.  The university is a special organization in many respects: the strongly hierarchical order between professors and postdocs, the separation into the two worlds of administrative and academic staff, the incredibly high number of temporary staff who nevertheless exhibit a high degree of intrinsic motivation, and so on. In other respects, it is a pretty “normal” place to work: moody and abusive supervisors, (sexual) harassment, unpaid overtime, fears about the job, psychological stress, etc. These issues have something to do with political ideas and how they are implemented and realized on a “small scale.” Justice? Solidarity? Freedom? Good life? The political work to realize them at the university – opr to discuss what they mean in the context oft he university – takes place on several levels and in different forms: in workers councils, in the daily work, networking and dealing with colleagues, in leadership positions, in trade unions or political parties, where one can get involved in changing the (legal) framework governing the university.

Now nothing has been written by me about the role of students – for a while they were considered important actors in the politicization of the university.  There are several reasons why they are no longer so to the same extent today, but that deserves its own consideration. Many of those working at the university – within and outside political philosophy – use it as a site for political work in various ways. So it would be worthwhile for political philosophers to take a closer look at this place, and to reflect on the extent to which and how they themselves appear as political actors for political ideals in this place, and also to ask whether and why they should do so (more so than before). Because if one considers certain political ideas to be important, it is plausible to assume that one has a responsibility to work for their dissemination and realization – also at the university and through one’s own activities there. 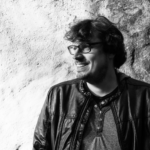 Gottfried works at the Centre for Ethics and Poverty Research of the University of Salzburg. His research interests include social and global justice, migration, childhood and poverty. You can learn more about his work on his website: https://www.gottfried-schweiger.org/