On The Decision to Leave Afghanistan

This post is not an assessment of the military performance of the Afghan National Army or whether the American withdrawal made sense politically (or if it could have been planned better). There are more qualified people for that task. What’s lacking in the current discussion is a just war perspective; in other word, a moral assessment of the decision to wrap up our military involvement in Afghanistan. This post offers a tentative analysis of President Biden’s decision to pull out of Afghanistan and, crucially, to do nothing to aid the government of President Ghani when it became evident Kabul would fall.

Let us begin by retracing American involvement in Afghanistan. America and Coalition Forces (CF) began bombarding Taliban positions in October 2001 in the aftermath of the terrorist attacks 9/11. The justification was one of self-defence: the Taliban provided safe haven for Osama bin Laden and Al-Qaeda – the group responsible for the 9/11 attacks – and without immediate military action, further attacks would be staged there. But military action against the Taliban then was not a straight forward case of self-defence. This is because Al-Qaeda had ceased its attacks against the US at the time American, British and CF fighter planes began bombing Afghanistan. At best, then, attacking Taliban then was a case of defence against a future threat. The logic was that had the Taliban been allowed in power, they would continue to provide a sanctuary for Al-Qaeda to freely plan attacks against civilians. 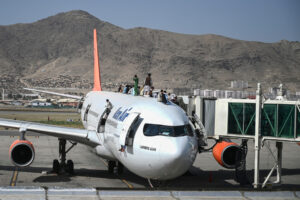 There was some weight behind this logic. 9/11 was not the first time Al-Qaeda under bin Laden targeted US personnel. There were the bombing of the U.S.S Cole and the double-bombings of US embassies in Tanzania and Kenya, to name some of the more prominent attacks. Now, while this logic makes sense, without a concrete threat, the details of which demonstrate another attack was imminent, the invasion of Afghanistan to topple the Taliban resembles either an act of reprisal or preventive military action, both of which are not generally accepted as a just cause for war under the traditional doctrine. An argument could be made that the nature of terrorist threat – clandestine, secretive, diffused – makes it impossible to intercept imminent threats. It would be too late to wait for the threat to develop and become imminent. The only solution to handle terrorist threats, the sort that was posed by the allegiance between the Taliban and Al-Qaeda, was to nip them in the bud: prevention rather than pre-emption.

Some just war scholars like Jeff McMahan think that preventive wars can be permissible if the following conditions obtained: a threat will attack at some point in the future and defending against said threat is possible now but not later. The argument against this, of course, is rarely do we possess the sort of epistemic certainty to determine whether both of these conditions can be satisfied. Broken relationships can be amended, ruling out the need for preventive action. Similarly, new technologies can emerge which can greatly increase the defensive capabilities of the defender. The debate about the morality of preventive military action is ongoing but let’s leave the initial phase of the war in Afghanistan and fast forward to the present.

Provided that the US and CF had just cause to invade Afghanistan in 2001 under the auspice of the right to self-defence, this mission had finished in the mid-2000 when both Al-Qaeda and the Taliban were routed out of the country. Al-Qaeda became a decentralised network with each regional group taking responsibility to conduct regional operations, losing the ability to plan and coordinate attacks on the scale of 9/11. The Taliban were operating out of bases in Pakistan, after having been swiftly overthrown by CF. And yet the US and CF would stay in the country until 2021, with a troop surge approved by President Obama in 2009.

The rationale for this period of fighting seemed to have shifted away from one of self-defence to one of supporting the new Afghan state from Taliban encroachment. The argument was made that the Afghan society post-Taliban was underpinned by democratic ideals of equality, liberalism and pluralism. Indeed, many positive changes did happen in the post-Taliban years. Women were allowed to have an education and stand for public offices. Elections were held, although some with questionable practices. Generally, people living in metropolitan areas such as Kabul or Kandahar (when the Taliban did not target these cities) enjoyed greater freedom compared to under the Taliban.

But there is a legitimate question whether distributive war to enhance greater level of individual rights can be permissible (Cecile Fabre is among the most famous proponents for distributive wars, or subsistence wars). The war in Afghanistan had resulted in the deaths of 69,000 Afghan soldiers and police, more than 50,000 civilians and more than 3,500 CF with the number of injured in the hundreds of thousands. Millions of people have had to flee the country permanently due to the violence. It is sensible to assume that had the US and CF not withdrawn by the agreed date this year, the Taliban would resume their brutal campaign, targeting CF and civilian targets. One should then ask if a war fought and sustained to gain more freedom for some Afghan can be proportionate, given the enormous human cost?

And there’s the requirement that a war must have reasonable chance of success. Put simply, one should not engage in fighting if one doesn’t stand a good chance to secure the objective through means of war. The US alone spent about $2 trillion over 20 years in Afghanistan, $83 billion of which on building up the Afghan security forces. However, the speed at which the government in Kabul fell to the Taliban demonstrates that without CF’s support, and together with it more bloodshed and losses of lives, the Afghan government couldn’t sustain the progressive gains on its own. When quizzed by reporters about his decision to leave Afghanistan, President Biden asked rhetorically if the Afghan government, after 20 years of receiving financial and military support from CF couldn’t defend the country, what are the chances they would be able to do so had CF stayed for longer? I believe the President here was referring to the principle of success: the war in Afghanistan, for various reasons, had become ‘unwinnable’ in that the objective of nation building and enshrining principles of liberalism could not be achieved through means of fighting.